THE MAIN SITE IS HERE! 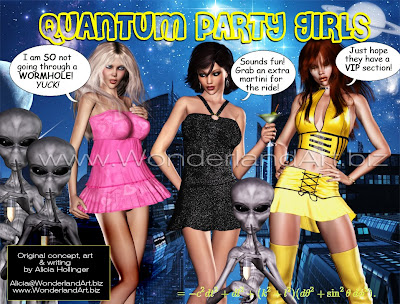 QUANTUM PARTY GIRLS
An original concept by Alicia Hollinger
BACK STORY:
Back on Zeta Reticuli there exists three very bored adolescent Grey Aliens. Lacking any kind of fun social life, the only way they can experience anything remotely fun is, well, remotely… Wishing to escape from their dull, structured monotonous lives, they begin to practice the secret art of Mind-Melding, an ancient craft long ago banned and considered frivolous, distracting and harmful.
The three young Greys secretly practiced the craft religiously and soon found a way to tap into the minds of the inhabitants of a most wondrous and exciting planet—a planet called Earth. Experimenting melding with thousands of minds throughout the planet, they finally settled on three of the most exciting minds on Earth, three fascinating young women in their twenties who live in the most exhilarating land in the galaxy, a sparkling beautiful city of angels called Los Angeles. They become obsessed with covertly mind-melding with Madison, Candi and Londyn, three alluring human females who enjoy life to the fullest, attending thrilling gatherings nightly known as “parties.” What the Greys did not realize however was that mind-melding can go two ways and soon the three girls begin to pick up their alien knowledge and abilities to affect matter in a way never before experienced on Earth. Although well hidden among the most superficial party people in Hollywood, the CIA eventually becomes aware of something very odd about the three party girls. Can Madison, Candi and Londyn live with these quantum super powers and knowledge and still have a totally awesome fun Hollywood social life?
THE MAIN CHARACTERS:
MADISON: A glamorous brunette, born in Manhattan, NY, attended the best upper East Side prep schools and went on to graduate with honors from Harvard. Madison loves to learn about everything, experience everything, meet everybody. To her, life is one big amusement park and she wants to try all the rides. She loves going to parties, but is not a bimbo. She loves talking about everything from quantum physics to art and philosophy and is a bit of a geek magnet, but most of the parties she goes to have more celebrities than geeks. She is a freelance writer specializing in celebrity gossip. She has coined herself the “over-educated party girl.”
CANDI: A beautiful bubbly blonde and yes, her boobs and lips are real, although no one believes they are, people pay plastic surgeons thousands and thousands of dollars to look the way Candi looks naturally. From a small town in Illinois, she was always the pretty popular girl. She skipped college and moved to L.A. to become a swimwear and lingerie model. Candi always has a smile on her face, a giggle in her voice and can have fun anywhere. Men fall to their knees at the sight of her and love to help her in any way they can. She especially attracts wealthy men who love to shower her with expensive gifts and money.
LONDYN: A stunning redhead celebutante, daughter of media mogul Richard Banks, Londyn gets paid millions of dollars just to attend parties most people would kill to go to. She’s been there, done that, gets bored easily and refuses to go anywhere that doesn’t have a VIP section. She has everything she could possibly want but feels empty inside, always looking for something to amuse her, fulfill her, but never finds it. With a very short attention span, as soon as she arrives a one party, she’s ready to move on to the next. Always looking for the bigger, better, most exclusive party, nothing is ever good enough.
The three girls are the envy of Hollywood, of the world. They seem to lead charmed lives, things just magically come to them. Their connection to the three Greys alter their lives in innumerable ways, but their connection to Zeta Reticuli may run deeper than we know. And when the CIA begins to suspect the truth, it becomes clear that “reality” is not at all what we thought it was…
STAY TUNED for the adventures of the QUANTUM PARTY GIRLS!
Contact:
Alicia Hollinger
Alicia@WonderlandArt.biz

EXCERPTS FROM AN INTERVIEW WITH ALICIA HOLLINGER ON QUANTUM PARTY GIRLS

"It's also a satire of Hollywood and the L.A. party scene, which I'm sure the aliens would find fascinating! The girls are going to start getting smarter although they don't particularly want to, getting top level knowledge accidentally from the aliens, blurting out quantum physics equations and things in the middle of superficial fashion parties. They'll gain some super powers too that they won't know how to control. Kind of like Paris Hilton party girls meets the SyFy TV shows Eureka or Stargate... There will be lots of sexy looking girls, but no nudity or obvious sex, but kissing I'll show.... More of a PG thing. Pretty much anything that could be shown on Gossip Girl or Melrose Place, pushing some boundaries but I'm treating it as if it could be a network TV show.

I'm actually fascinated with the idea of aliens, have seen them and spaceships in my dreams a few times... I've even joked a few times that maybe they were living vicariously through me, enjoying all the crazy Hollywood parties I've been to--that's kind of where the concept for the comic book came up. That, and the time I was at the Playboy Mansion for Hefner's birthday party and I mentioned something about quantum physics and all the younger guys turned to me to talk and ignored all the Playboy centerfolds! So, I thought what about quantum physics AND Playboy centerfold type girls--there's a concept!"

A second concept: Supermodels in space. Someone had to do it... 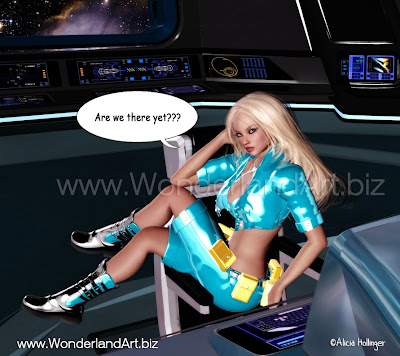 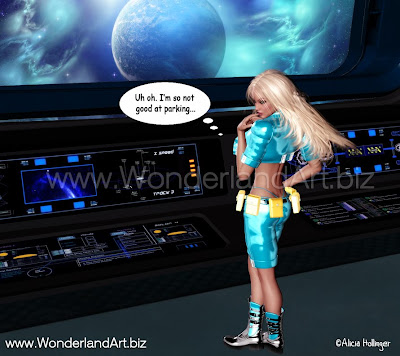 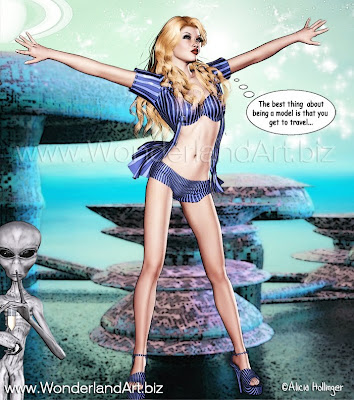 Alicia Hollinger
Los Angeles, CA, United States
Wonderland Art by Alicia Hollinger
www.WonderlandArt.biz
My art and writing are very much influenced by my experiences here in Los Angeles/Hollywood.
Pop-culture fascinates me and I feel like much of it stems from my own neighborhood near the Sunset Strip. I've worked in various aspects of the entertainment industry and I've experienced first hand the glamour, parties, VIP sections, after-parties in the hills, the hype, decadence, shallowness and insanity...
My images tend to be colorful, a bit over-saturated, because life is over-saturated here. Life in L.A. is like Wonderland, a crazy wild life where you never know what to expect, but at least it's never boring!
I am also fascinated with quantum physics, sci-fi, lucid dreaming, and after four Comic-Cons, a whole new side of pop-culture has infiltrated itself into my art and I now actually get most of the references on "Big Bang Theory!"
Gallery quality art prints and custom commissioned art available by request.
Original digital art/graphic design for marketing, promotion, ads, websites, comic book, book covers, DVD, CD covers, movie posters, etc...